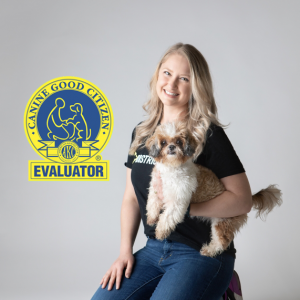 Sophia brings a wealth of experience in training well-behaved, well-adjusted dogs and equipping pet owners with the confidence, knowledge, and tools to maintain that training at home. Sophia is certified in Dog Training and Animal Nutrition and has worked in the field of pet care and training for over five years. In addition to running her own professional pet care and training business, Sophia also has experience leading group classes for dogs of all ages. She has worked as a volunteer specializing in behavior and training for the Animal Welfare League of Alexandria since 2019. Her greatest passion is to improve the lives of animals, and she believes that training is a vital tool in building better lives for dogs and their humans.

Matt was born and raised in northern Virginia. Having grown up with several large breeds in the house since a young age, he has developed a strong relationship caring for larger dogs. He has spent several years in the dog care industry. Working in daycare, boarding, and even running a foster program with a local beagle rescue. He has most recently settled on training and his passion for dogs has only grown since then. Matt has a soft spot for rescues and helping their new parents build a strong and loving relationship with them. “Training gives you a way to strengthen and improve your relationship with your pet in a way not many other things can”. He has two dogs of his own at the moment. A German Shepherd/Husky mix named Paloma who has a large personality and lives for attention from people. His other dog is a cattle dog mix named Hillary. She only has one speed and it is 100mph. They both keep him busy when he is not helping others train their pets. 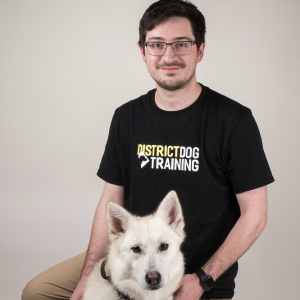 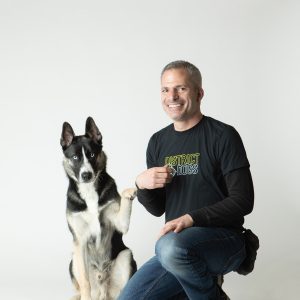 Having grown up in a home where dogs outnumbered humans, Avi has always had a natural kinship with our four-legged companions. He received his certification from Animal Behavior College in 2012 and has been working to improve the relationships between dogs and their people for the past 8 years, with a specialty in leash reactivity training.  After accepting a position managing a dog walking company upon moving to Washington, D.C. in 2008, he quickly realized that working with dogs was his lifelong calling.  Since then, he worked at Spot On Dog Training in Washington, DC, and has made a commitment to furthering his understanding of canine behavior, helping rehabilitate recent rescues, and mentoring other prospective trainers who share his passion.  Avi is proud to be apart of the District Dogs Training Team!

Kore (pronounced like Core-ah) is a 23-year-old Scotland native who was raised in Virginia Beach and whose passion for dogs turned into a career. Owning dogs her entire life, she decided 7 years ago to start working with them professionally operating in shelters and private daycare and boarding facilities, but her dream job was always to become a dog trainer! Kore is a positive reinforcement only trainer with a background in agility, tricks, puppy and basic obedience, separation anxiety, therapy dog and service dog training, and behavior modification. Her work with shy, rehabilitation dogs and therapy dogs was some of the most fulfilling she’s ever done though she loves working with new puppies, too. She says, “With training, I think the most satisfying moments are when I get to see people connect with their dogs and get to be part of their relationship growing and becoming stronger.”
Kore has a 9 year-old cat named Nyx and a Great Pyrenees rescue named Howl at home. She loves large breed dogs and has a wealth of experience with them – Howl is her second Pyrenees! As a dog lover, she isn’t breed particular but does have a soft spot for the bigger babies. In her spare time she loves to crochet and calls it her “little old lady hobby”. Her favorite animal is the Red Panda and if given the opportunity (and household permission), she’d bring one home in a heartbeat! 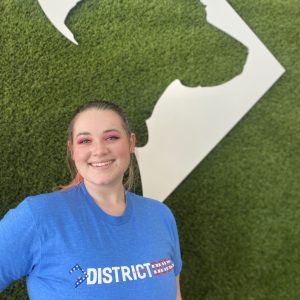 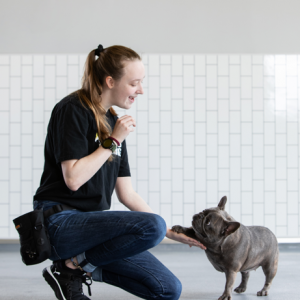 Since childhood, Hale has been an animal lover, growing up in a house of cats with a mother who worked as a vet tech and groomer for over a decade. As a kid, she would go to work with her mom and help with dog walking and dog bathing and enjoyed observing the behind-the-scenes work of the veterinary clinic. Hale has always had a soft spot for cats and eventually worked as an Adoption Counselor at a nonprofit animal shelter in Roanoke, Virginia, where her newfound interest in canine behavior and rescue rehabilitation began. After experiencing the heartache of animal relinquishment caused by the frustration of behavioral issues, it has become her goal to work with rescue dogs, assisting owners of newly rescued dogs in making their homes comfortable for their new family members and giving them the tools to communicate with and understand their pets. Although it takes time for rescue dogs to acclimate to a new home fully, Hale believes that educating and working with new pet parents helps them and their rescues succeed together.
Hale lives in Alexandria with her boyfriend and their respective pets, Gertrude the tabby and Kaiser the wirehaired dachshund. They enjoy lazy days and long drives, going to breweries and wineries, her hobbies include drawing and gardening, and her favorite band is Rush.